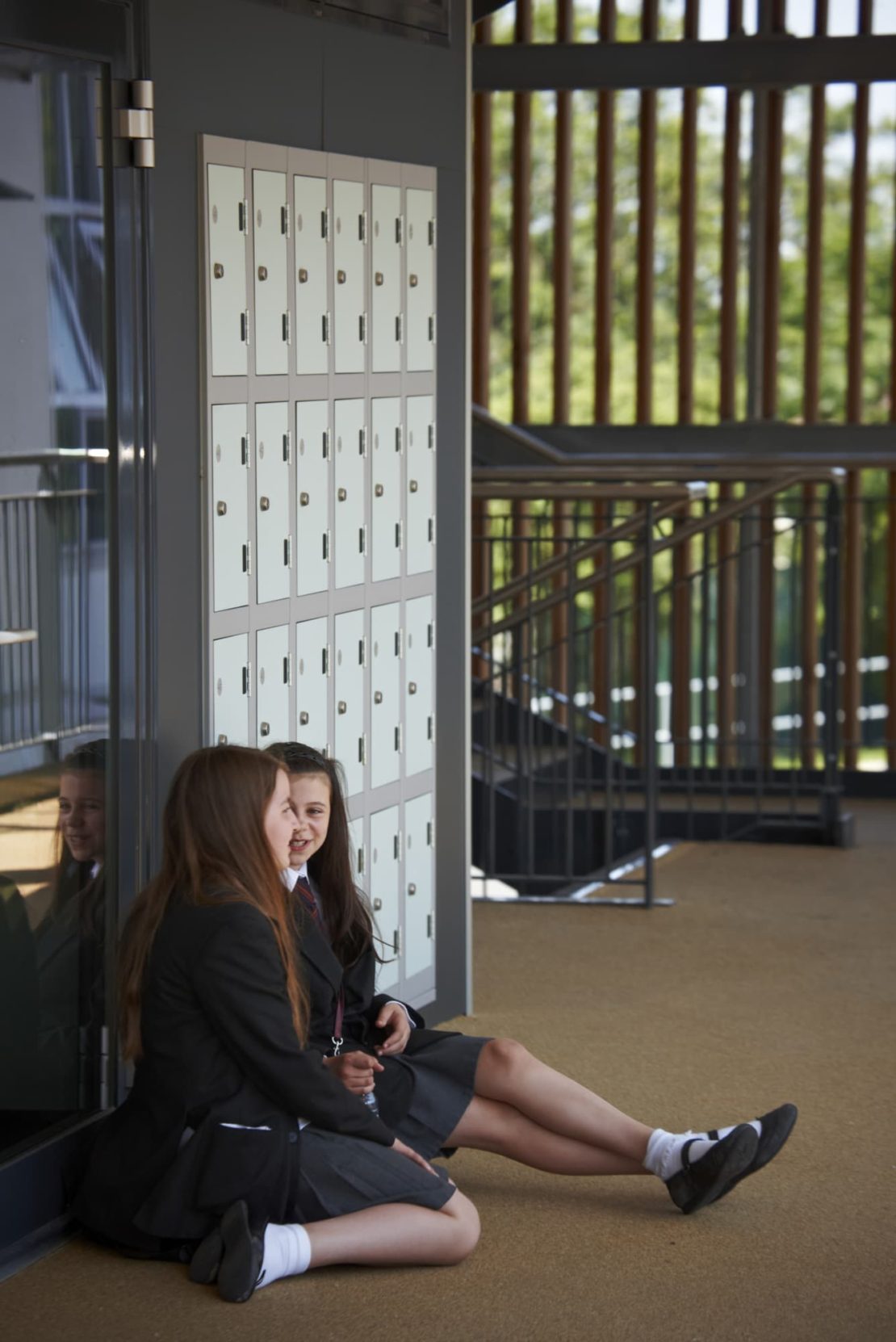 Is design a worthwhile investment when it comes to education budgets? Can good design add value to the experience of pupils and teachers in our schools. Can it improve outcomes?

Against the continuing debate, fuelled by controversial headlines, the visual language of Penoyre & Prasad’s recently completed Wren Academy communicates a culture of respect and inclusion, in its details as well as its overall plan.

Journalist, Veronica Simpson visited the new school to find out more… Buildings are such a powerful means of expressing the values, activities and aspirations of the communities they house, and never more so than when it is a new community – one that wishes to generate the support and motivation of the surrounding neighbourhood. As such, Penoyre & Prasad’s new Wren Academy, in Barnet, North London, had much to deliver.

The Diocese of London, a clients with 350 years of experience in education, had one primary aim for the symbolism and function of this school: to promote a sense of ownership and inclusion. However, Wren Academy is one of very few UK academies to have Design and the Built Environment (DBE) as its specialism. This lays a particular burden on its architects to deliver a building that can serve as a good example of its kind, despite heavy compromises on budgets and several revisions of the plans, from what started out as a refurbishment of existing 1970s blocks to the finished product, comprising two refurbished blocks and three new ones.

So does it deliver what the clients and the community wanted? In subtle and convincing ways, yes it does. From the approach, along Woodhouse Avenue, you would hardly know it was there. Viewed across the playing fields that flank this main road, all that is visible is the silvery bulk of the sports block’s profiled aluminium cladding. It is only as you approach the entrance, up a side road of 1930s semi detached suburban houses, that you appreciate the discreet nature of its design. The five school buildings visible through its high gates are mainly two-storey, echoing the scale of the surrounding houses. The staggered pitched roof lines arranged around loose, informal courtyard spaces emphasise the sense of a small village of separate but linked dwellings – or, as architect Gillian Horn has said, the “casual but relaxed disposition” of farm buildings.

As you enter the main building – the North Block – there is a strong sense of welcome and arrival: reception desk to the left, low ceiling overhead, and then a pool of light ahead drawing you towards a three-storey central atrium space which drops down one level, taking advantage of the site’s 4m slope, to deliver a powerful sense of place.

Although overt visual reference to the clients’s religious status was not part of the brief, this central space has the dimensions and drama of a cathedral nave, enhanced by the placement of surrounding features: the arranging of two tiers of classrooms above the main gathering space, creating a cloister; clerestory glazing on both levels; an open balcony at the upper level. The assembly and performance hall – which can be screened off completely – to the right, and the amphitheatre-style steps down from reception reinforce this as a place for gathering and sharing. The symbolism of the library being placed here, at the school’s heart, cannot be lost on visitors and pupils alike. What’s more, the rhythm of shelving and desking around the library and in the open plan ICT suites tucked away to the right of the library evokes that of the smaller chapels that often flank the naves of great cathedrals. Head teacher Michael Whitworth sees this central gathering space as “a visionary space. It’s a big statement about putting learning at the heart of what we do. It’s a very deliberate and visual part of our organization.”

The only other reference to church architecture is a subtle ‘transept’, in the first floor corridor that runs perpendicular to the nave, looking out onto leafy allotments and neighbourhood back gardens to the south, and playgrounds and playing fields to the north – windows within and beyond the school’s boundaries.

With three year groups now in place (two of whom moved onto the site a year ago, while the North Block was still under construction), Whitworth, and Jane Snowsill, assistant principal in charge of the DBE specialism, both comment on how well the children have responded to the new spaces. Snowsill says: “I’ve taught at some tough schools…when I first saw the new buildings, and the balconies, I thought, ‘oh no!’… but that’s not been the case. The children do see it as theirs to look after… They respect the buildings.”

Whitworth is particularly pleased with the school’s legibility.” I am used to having to be more prescriptive about how and where people move but our students have found their own way and they have done that very well.” He is also “pleased and surprised” by how responsibly pupils have used – and not abused – the building, especially the unisex toilet areas; at regular intervals, high quality, tiled, unisex WCs are shared by staff and students alike, with cubicles arranged around a central, bespoke ‘wash trough’.

Asked why the children have responded so well to the space, architect Ian Oppenheim thinks orientation plays a key part. “The children know which side of which block they are on when they are sitting in the classroom.” For example, in the older, refurbished South Block, south facing rooms have steeply pitched roofs and clerestory windows allowing cool north light in. Playful variations of structure between buildings creates clarity. Says Oppenheim: “It’s subtle but the kids get it. When they come out of a classroom they know where they are heading to. They don’t have to think about it. Another thing people notice is that they don’t run. They are quite happy and carefree, but there’s no anxiety about where they are going.”

Oppenheim also feels “they are very comfortable being in an environment where they feel they are not being treated as children. There are no coloured walls, no accent walls – none of the obvious sops to kids. Where colour is used it’s used quite carefully.” Lockers are scattered around the courtyard in blocks that evolve from blue through to pale green, with just one splash of what Gillian Horn describes as “Miss Marple Purple”. There is the odd flash of orange, such as the long, low bookshelf that runs the length of the central atrium’s nave (a hypothetical aisle?). As much wall space as possible has been left white, for the pupils to fill. The old assembly hall, now the kitchen and dining block, features splashy collages in sorbet colours on one wall. A thick balustrade that divides the lower dining hall from the upper mezzanine area hosts a procession of colourful perspex sculptures. This multipurpose dining, chilling and workspace was Penoyre & Prasad’s suggestion and has proved popular: here teachers sit tapping at their laptops through the day, and at breaktime pupils log onto the computers provided. Again, Whitworth confesses to being pleasantly surprised: “I have realised that people are essentially social beings and the work spaces in the restaurant have been used more than I thought they would be.”

There are many visual cues reinforcing these buildings as ‘grown-up’ spaces. Oppenheim refers to the high step heights and the simple, transparent balustrades which are the same height you would expect in a building not designed specifically for children.

This feeling of equality and respect is reinforced by the fact that there is no apparent difference between classroom spaces and staff workspaces. Glass fronted, and containing exactly the same furniture for pupils and staff, “they look identical,” says Oppenheim. “They have the same profile.” This similarity was instigated primarily to create maximum flexibility – staff workrooms or classrooms can be used as seminar rooms, or vice versa, and several of them have sliding doors so they can be doubled in size or even opened out onto circulation spaces.

The dispersal of staff workspaces across the campus, and the degree of glazing, also reinforces integration and passive supervision. A sense of calm is enhanced by the grey carpet tiles that line corridors and classrooms, minimising the echo and twang of voices and the scrape and clatter of chairs and feet.

With budgets pared back to the bone, Penoyre & Prasad still managed to prioritise key areas: perforated oak pannelling is used to line the entrance, LRC, hall and reflection room, adding a feel of substance and quality. Handrails are oak throughout.

Says Whitworth: “Its not just that the building facilities effective teaching in well designed classrooms – to some degree a classroom is a classroom – but the layout as a whole facilitates a state of mind – purposeful, safe, and creating a sense of pride.’