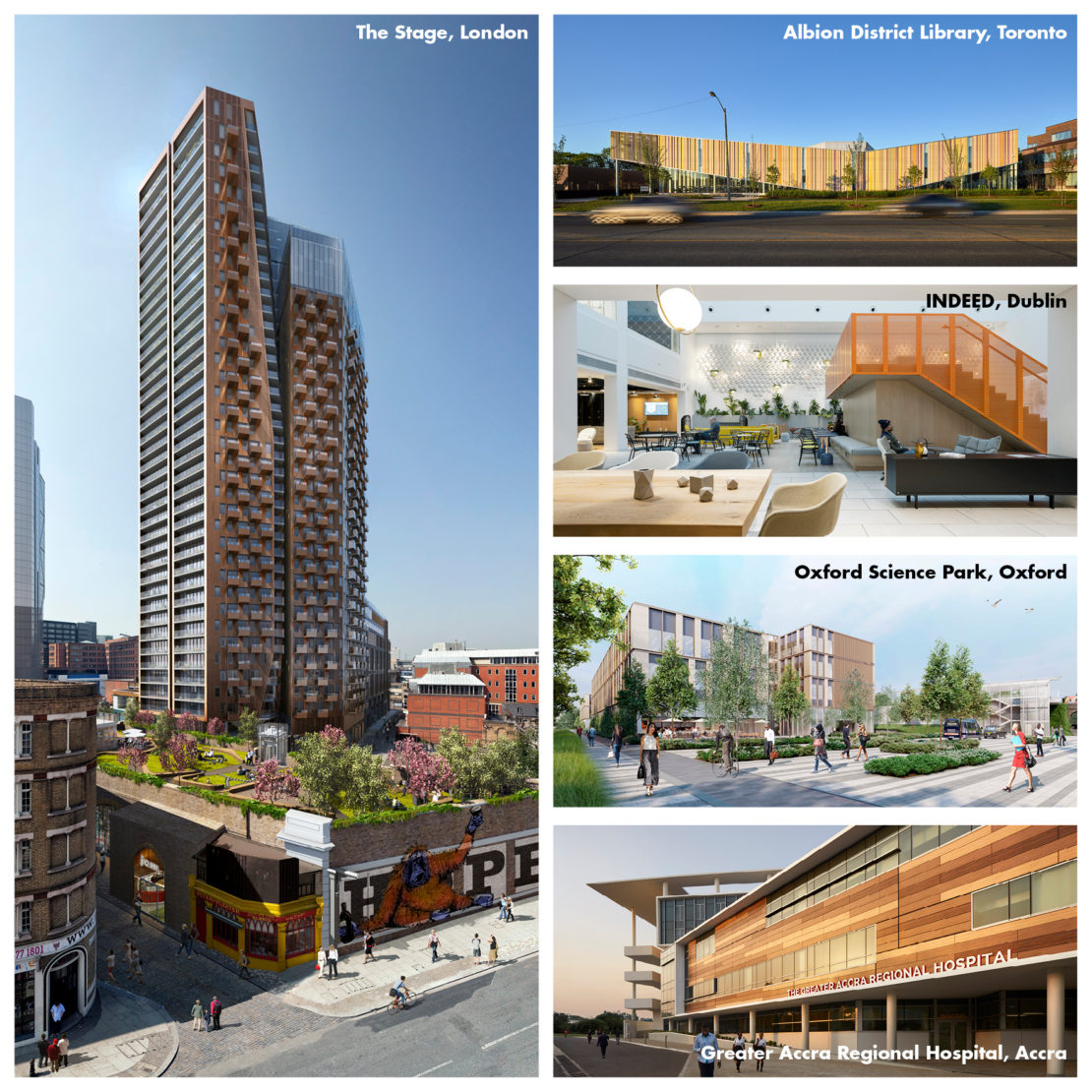 The merger, rooted in the firms’ shared values, promises numerous benefits for clients in the UK and abroad.

Penoyre & Prasad, the award-winning architecture firm known for designing some of the UK’s most sustainable educational, healthcare, residential, and cultural buildings, has joined global design firm Perkins and Will, named one of the world’s most innovative companies in architecture.

The merger, which grew out of the firms’ common environmental and social concerns, goals, and design philosophies, benefits both practices while enhancing design services for clients worldwide.

“There are so many shared values between our firms that this partnership felt natural to us. We’re looking forward to using our combined capacity to deliver even better results for our clients, more efficiently,” says Sunand Prasad, who co-founded Penoyre & Prasad in 1988.

Ian Goodfellow, a partner at Penoyre & Prasad, elaborates: “The global resources provided by Perkins and Will mean that we can increase our reach and fulfil our ambition to design in a more holistic way, with wider impact. This is particularly important given the climate emergency the world is facing.”

Penoyre & Prasad’s merger with Perkins and Will establishes a stronger architectural presence in London and the region, says Steven Charlton, managing director of the Perkins and Will London studio. Now a combined entity, the London practice will be able to design and deliver both commercial and institutional projects—and do it across all typologies, including interiors. The timing of the merger, Charlton says, is perfect:

“We’re joining forces on the heels of our winning the international design competition for the European Commission office complex in Brussels, and only a few months after the unveiling of our new brand. There’s so much forward momentum. In partnership with our Danish colleagues at Schmidt Hammer Lassen, and our partners at Portland Design, we’re ready to double down on our commitment to London, the entire UK, and all of Europe.”

Mark Rowe, a partner at Penoyre & Prasad, says he and his colleagues are looking forward to being part of a bigger, global team: “Our practice has always thrived due to its diversity of voices, and adding a truly global dimension to that design conversation opens an exciting new chapter for us.”

“Our new colleagues from Penoyre & Prasad are an invaluable addition to our team, and to our network of clients,” says Linzi Cassels, design director of the London studio of Perkins and Will. “Now, we can seamlessly apply best practices in commercial architecture and interiors to projects in the healthcare, higher education, and civic sectors. And vice-versa. Our clients have access to everything they need under one roof.”

Projects led by the London studio of Perkins and Will include The Stage, a mixed-use development in Shoreditch on and around the site of discovered remains of Shakespeare’s Curtain Theatre; 150 Holborn, a commercial office building in burgeoning “midtown” London; a laboratory and office complex in Oxford Science Park, in Oxford; and One Station Square, a mixed-use office and retail building with a public park on the campus of CB1 in Cambridge.

Projects led by Penoyre & Prasad include Oriel for Moorfields Eye Hospital and UCL Institute of Ophthalmology in St. Pancras; Pearl, the transport laboratory for University College London in Dagenham; the Kantor Centre of Excellence for the Anna Freud Centre and The Family School near King’s Cross; the Sibson Building at the University of Kent in Canterbury; and Bobby Moore Academy all-through school in Queen Elizabeth Olympic Park.

Among the many synergies between the two firms is research: Both place tremendous value on it as a tool to enhance their practices and advance the design profession. The Perkins and Will Research Journal has been published for 10 consecutive years, to date producing 20 volumes of in-depth, peer-reviewed research and analysis of issues related to design process, delivery, and performance. The firm’s investigation into material health, in particular, earned international headlines. Meanwhile, seven Perkins and Will research labs regularly examine critical areas of focus for the firm, including energy, mobility, resilience, and the human brain’s response to the built environment.

At Penoyre & Prasad, the team is also known for producing seminal research and reference documents, going as far back as 1991 with the National Housing Federation report Accommodating Diversity: Housing Design in a Multicultural Society, which garnered international attention. The firm co-authored the Construction Industry Council’s 2003 Design Quality Indicator toolkit, which continues to enable collaborative brief building and monitoring. And its contributions to healthcare and education include the book Changing Hospital Architecture, the supplement Sustainable Healthcare Design, the report Schools for the Future: Exemplar Designs, and the research project Spaces for Personalised Learning. Today, the firm remains actively involved in knowledge creation and large-scale knowledge-sharing. It has contributed to the UK Green Building Council’s and the Greater London Authority’s work on the circular economy, and is serving as a founder member of the Higher Education Design Quality Forum.

“Now that we have the added research capabilities of Perkins and Will, along with its global network of knowledge, we can take our design curiosity even further—asking more questions, digging more deeply, investigating more comprehensively,” says Rafael Marks, associate  partner at Penoyre & Prasad. “It’s very important to us—particularly when it comes to writing the next chapter of sustainable design innovation.”

Sustainable design innovation is another synergy between the two firms. As mission-driven organisations, both work diligently to reduce the environmental impacts of buildings and other spaces, and to create places that support optimal health and well-being. They’ve been independently recognised for their efforts, too: Penoyre & Prasad was named Sustainable Practice of the Year in 2014 by the UK publication The Architect’s Journal, and in 2018, Perkins and Will earned the designation from American business magazine Fast Company as one of the World’s Most Innovative Companies in Architecture specifically for its creative sustainability strategies.

“As architects, we strive to design places that have measurable, positive effects on the health of people and the planet,” says Goodfellow. “There’s some truth to the adage that there’s power in numbers, and we believe that by joining Perkins and Will, over time, we’ll be able to make an exponentially bigger difference in the world.”

Other areas of overlap include the firms’ passion for designing places that support well-being, such as healing environments, schools, libraries, and museums; their dedication to a collaborative design process that involves the input of clients and community at every level; their commitment to giving back to the community; their ongoing efforts to diversify their practice and the profession; and their enthusiasm for public outreach, education, and mentorship.

The merger also brings together two well-known London architects: Jack Pringle, president of the Royal Institute of British Architects (RIBA) from 2003 to 2005, and Sunand Prasad, who succeeded Pringle as RIBA president from 2005 to 2007. Pringle and Prasad have independently authored scores of thought leadership texts and presented at numerous conferences and roundtables. Both are deeply involved in the design community, occupying leadership roles on various boards, committees, and advisory groups, including the humanitarian architecture charity Article 25.

“Sunand and I have worked on a number of projects, programmes, and initiatives for the more than 20 years we’ve known each other. Frankly, it’s marvellous that we’re now able to work together again,” says Pringle.

“We’re delighted to blend the industry leadership of Perkins and Will with that of Penoyre & Prasad because, together, we can offer our clients the very best talent and the full gamut of design services,” says Phil Harrison, CEO of Perkins and Will. “This new partnership is an important investment in our London practice—one that reflects our conviction that London always has been, and always will be, one of the greatest design centres in the world.”