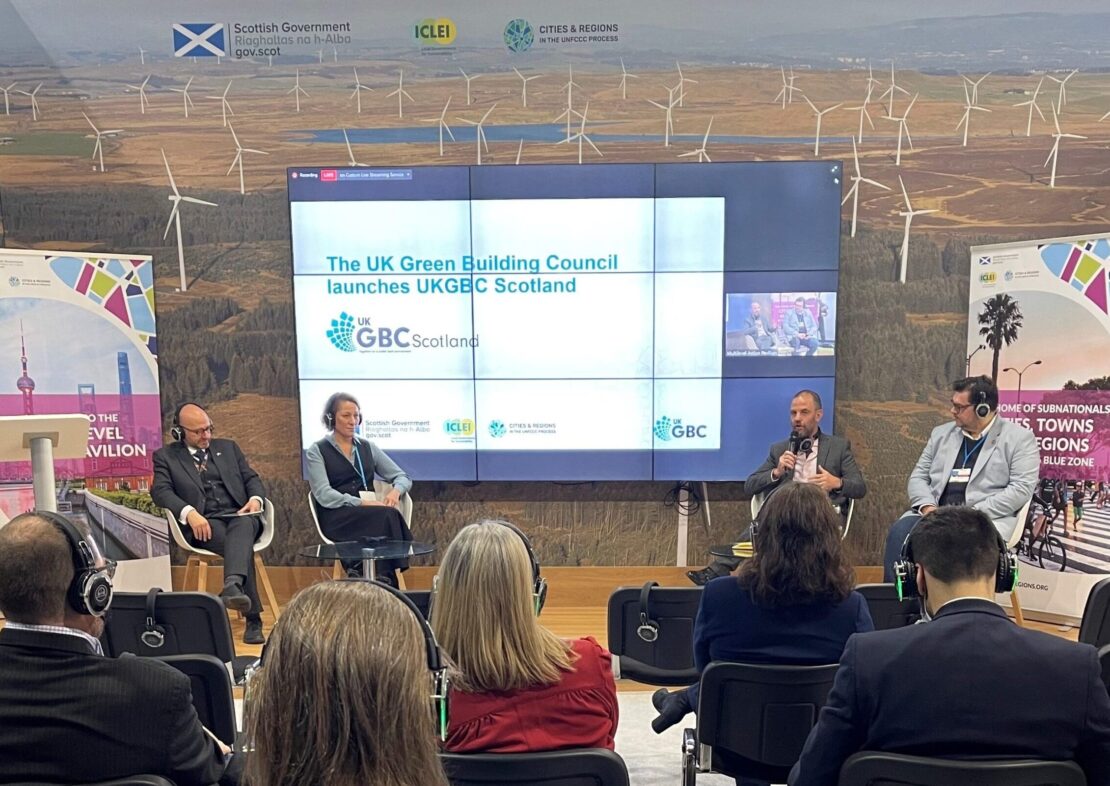 Sunand Prasad was in Glasgow last week for COP26, and has been sharing his thoughts from the conference.

Although I was in Glasgow and Edinburgh for most of the second week of COP26, much of my time was spent doing the day job. The ease of that would, of course, have been un-imaginable pre-lockdown. It’s a double-edged sword though; I could easily do necessary studio work but it cut me off from wandering around the Fringe COP26 and the Green Zone. The former was happening happening all over Glasgow, and the latter was accessible in the second week without a ticket to an organised event. So, including The Blue Zone, which is where the main conference rooms are, there are three COPs, the Blue, the Green and the Fringe. I attended COP26 mainly in my role as Chair of the UK Green Building Council (UKGBC), and the fantastic UKGBC Team, lead by Julie Hirigoyen, organised and attended a number of events. A key date for us was, of course, the Cities, Built Environment & Regions Day (11 November), but just as significant for the Green Building Council was supporting Scottish members and the important launch of UKGBC Scotland.

UKGBC was founded in 2007 when, for the first time, Climate Change was on newspaper front pages.  Many of us campaigning for a more sustainable, low-carbon built environment thought that real change was inevitable. Even the Murdoch empire appeared to be on side; after all Margaret Thatcher, a scientist by training, has been amongst the first politicians to raise concerns about climate change. We imagined the media barons had clocked that you can’t sell papers and TV ads if huge parts of the world were under water or burning – enlightened self-interest, in short. All three large political parties had manifestos full of green policies, and in 2008 the UK became the first country to pass a Climate Change Act that enshrined emissions reductions in law.

Then we had the world financial crisis, Climategate in 2009, and the coalition government in 2010, and all the progress that seemed to have been made was undone. Within three years of its founding the UKGBC was tilling barren land. Just one example: over a million homes have been built in the UK that would have been near zero carbon, under the Code for Sustainable homes – that is a million more homes to now retrofit unnecessarily.  COP21 in Paris, in 2016, offered a bit of hope, mainly because of pressure from the small island nation for whom climate change has been a manifest existential threat for a decade. Not till 2018 was there real cause for optimism (not that true optimists need reason) with Greta Thunberg and the school climate strikes, followed by the actions of Extinction Rebellion which generally received unexpected popular support. About then the Intergovernmental Panel for Climate Change produced its special report setting out the drastic action needed to keep with a 1.5 degree Celsius rise, as COP21 had aimed for. Amazingly, this momentum has continued through the pandemic and via remote meetings. Applications for membership of UKGBC have rocketed and, with that, its reach and activities. The GBC’s focus, during the difficult years, on those who commission and invest in buildings – the developers, the lenders, the financiers – has proved to be particularly effective. That has given it a very wide reach in the built environment sector, I am pretty sure the widest of any UK organisation, encompassing consultants small and large, professional institutions, developers, local authorities, product manufacturers, contractors, and specialists suppliers. UKGBC works almost entirely through collaboration, with dozens of partners helping to deliver. ­

In step with the growth in UKGBC membership, and to support Scottish members better, it was decided to set up UKGBC Scotland. Following a launch in Glasgow the previous week, I compered the Edinburgh launch event at SpACE (Space for Architecture, Carbon and the Environment), a new pop-up centre in an old fire station, thought up by Bennetts Associates. There was a warm welcome from Scottish members of the UKGBC, and the evening was crowned by a hugely supportive impromptu speech by Scottish National Party Councilor, Neil Gardiner. To launch UKGBC Scotland now seems propitious: the climate emergency, more so than in 2007, is a huge public concern; COP26 is taking place in Glasgow, and Scotland has the most ambitious climate policy of any nation.