The Pavilion is part of a family of buildings making up the David Ross Education Trust’s new all-through Bobby Moore Academy located in the heart of the Queen Elizabeth Olympic Park, London.

The Primary School, Pavilion and Multi-Use Games Area (MUGA) are located along the banks of the River Lee Navigation canal in the shadow of the Olympic Stadium, while its larger sibling, the Secondary School is to the east of the Stadium overlooking the City Mill River and the Olympic Park. The Pavilion supports the adjacent MUGA which is available primarily for the school but also for the wider community outside school hours.

The building reconciles conflicting requirements of a small programme; the need to create privacy and security for the children, and the planners’ ambitions to create an open and transparent ‘beacon’ at the intersection of a new bridge from Hackney Wick to Loop Road. The resulting design is a small object building that punches above its weight, announcing itself on the corner with its basket-weave turret and a window allowing views from the road through to the MUGA beyond.

The Pavilion is conceived as a brick garden wall wrapping around the small site to create a protective enclosure for the changing rooms and gathering space. The wall forms a definitive urban edge to the exterior, while opening up with a more colourful façade facing the MUGA. To the north, the wall protects a pocket of south facing sunny space for players to sit and relax.

The building is separated into two parts – a taller semi-circular building on the corner and the lower longer block of changing rooms. A glazed slot between the two allows for views through to the playing field, creating a carefully controlled visual connection from the street.

On the MUGA side, a zig-zag canopy provides a covered entrance into the complex, providing a sheltered viewing platform for visitors. The gap between the two parts of the building provides touchdown space for players before and after their games. The window from this space focuses directly on the Olympic Stadium, reinforcing the connection to sporting excellence and the art of the possible.

The materials of The Pavilion relate back to the Primary and Secondary School palette, creating a united, shared identity. The elevations comprise full brickwork laid in a Flemish bond. The alternating black header, white stretcher sequence, echoing the two-tone aesthetic of the Schools, provides the flexibility to create elevational interest. The wall is animated and enlivened through a two-tone brick weave, with lighter brick ‘stitched’ into the dark brick. The internal elevation comprises a lightweight yellow aluminium cladding which relates to the yellow panels and soffits on both Schools.

A series of pixelated figures, inspired by the animated photographs of Eadweard Muybridge — the 19th century English photographer important for his pioneering work in photographic studies of motion and in motion-picture projection — leap across the elevation signifying its use. In other places, the headers have been omitted to create an open brick mesh providing privacy and security to the changing room windows and a visual screen to the rooftop plant.

The building design is innovative in the following ways:

Inspired by the gold of the Olympic medals and the football World Cup, the yellow flashes of colour highlight key moments, special spaces and reinforce entrances, offsetting the restrained colour palette of the brickwork and aluminium. In The Pavilion, a yellow-lined gathering space is seen as a flash of colour from the street. Elsewhere, yellow perforated aluminium panels provide screening and signage. 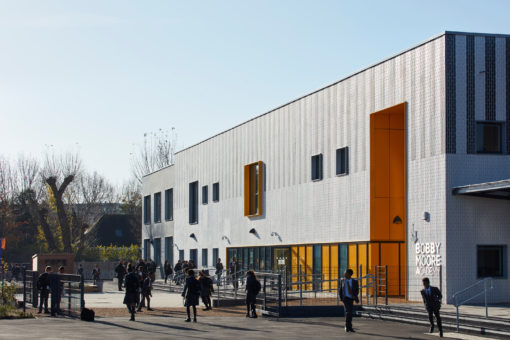 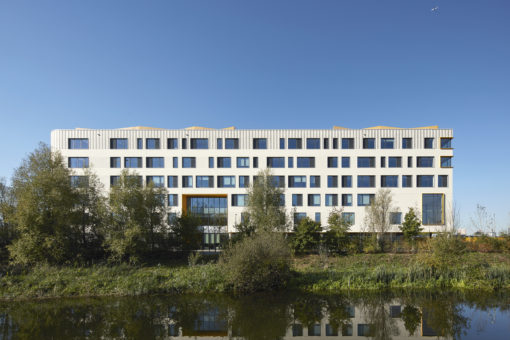 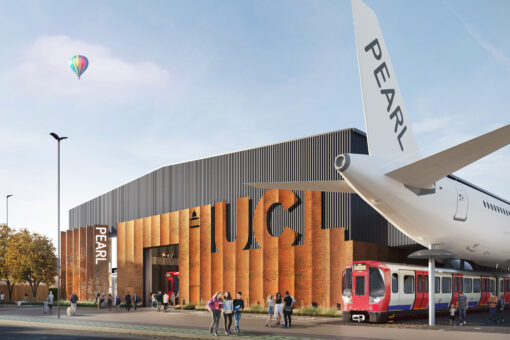 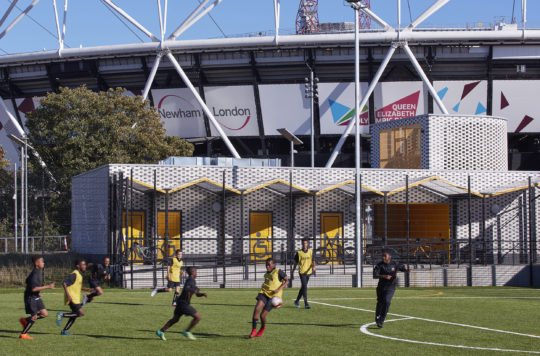 The Pavilion, part of a family of buildings making up the David Ross Education Trust’s new all-through Bobby Moore Academy, won the Building 'Small Project of the Year (up to £5m)' Award on 5th November 2019. More